While walking through Central Park in Manhattan, my son noticed some people rolling balls on the ground and asked me what they were doing? I explained they were playing Bocce Ball.

Bocce ball is a fun, easy game that people of all ages can enjoy. This guide will teach you everything you need to know to play bocce ball, from its history, game basics, and strategy tips. So grab a partner and get ready to have some fun.

In this guide, I cover:

Italians gave the world pizza, pasta, and Chianti, but not many people know that they developed the modern game of Bocce Ball, also known as “Italian Bowling.”

Bocce (pronounced ba-chee) may be attributed to the Romans; however, the game of tossing a ball to hit as close as possible to a goal or target dates back to the early Egyptians. Ancient hieroglyphs depict Egyptians throwing balls on flat courts.

Sure, the word bocce is the plural of the Italian word ‘boccia’ which means balls. However, experts believe that the word Bocce originates from bottia, the (vulgar)  Italian form of ‘boss.’ Which may have been applied because the head of state, like Emperor Augustus, often played the game.

The Greeks also played a similar game (Greek doctors believed Bocce ball to be a ‘restorative activity’). However, the Romans infused excitement and passion into the game and spread it all over Europe.

The Roman nobility took to playing Bocce ball as well. As mentioned before, Roman Emperor Augustus loved it and encouraged everyone from his centurions to soldiers to adopt it as well. (It is believed that Roman soldiers may have played Bocce between wars as it helped them recuperate and re-energize.)

Earlier, the Romans would play Bocce with whatever they could get their hands on; stones, wooden orbs, etc. But soon, they discovered that coconuts from Africa worked better in providing the necessary projectile motion, and that gave them the idea to use hard olive wooden balls.

Similarly, the Brits created lawn bowling which they played with weighted orbs. Through the years, many famous Italian names in history also enjoyed Bocce Ball: Galileo, Garibaldi, and Benito Mussolini, just to name a few. It was little wonder that Bocce became the Italian national pastime.

The first official Italian Bocce League was formed in 1947, and the first World Championship was also held in the same year in Geneva. Today, despite its colorful history, Bocce Ball remains more or less the same, although the balls have undergone several cosmetic changes.

For one, the projectile balls (Bocce balls) are harder and made of synthetic plastic. Their size is the same as a softball. The target balls or Pallino balls are more or less the same sizes as a golf ball.

How to Set Up Bocce Ball Court

Bocce Ball is a popular game that can be enjoyed by people of all ages. Like horseshoes and ringtoss, it is a great yard game to play outdoors, and it can be enjoyed by anyone who knows how to throw a ball. So, if you are looking for a fun new activity to enjoy with your family and friends, then read on to learn how to set up and play Bocce.

The game’s objective is to roll the Bocce ball as close to the Pallina or Jack. Every Bocce ball that lands closer to the pallina than the opposing team’s balls is worth 1 point at the end of the frame. The team to first score 12 points is the winner.

Start of the game

The first person to throw the ball has an advantage.

Using the Bocce balls to hit the side rails and backboards.

The term is used to describe the Bocce ball that touches the Pallino.

An active Bocce or Pallino ball during gameplay.

The pointing shot is the most common throw in the game. Players have to deliver this shot in a crouching position. Its objective is to get the Bocce ball as close to the Pallino/jack as possible without using too much force.

Players may use the Pointing shot when no other balls are blocking the Jack. They can also use it to block the opponent’s ball from hitting the Jack or setting up the balls so that their team members can later move into scoring position.

A smashing shot is a strong underhand shot throw players execute as close to the ground as possible. They may use it to disturb an unwanted formation of balls on the court. To deliver this shot, players typically run a short distance from behind the foul line before releasing their Bocce ball.

Players use this advantageous shot to hit the Pallino when other balls are blocking it. They make use of the sideboards to bounce the Bocce towards the target. Players of the team that won the coin toss may also use the bank shot to place the Jack and follow this up with the Bocce ball at the same point.

We recently went camping with a couple of families, and one of them brought the GoSports Backyard Bocce Set along. Boy, did we have fun with it! And since spring is coming soon we bought this set for our next party.

There are a couple of things I love about the GoSports Backyard Bocce set:

The set also comes with clear instructions. Also, the colors are very attractive, so you can spot them easily. It also has more colors so more people can join in the play.

Here are the physical attributes and features of the Bocce Set from GoSports:

Make your next beach outing, BBQ, or outdoor party even more fun with this super affordable Bocce set from Frankin Sports. It contains everything you need to start the game and comes with a lightweight and portable carrying case. 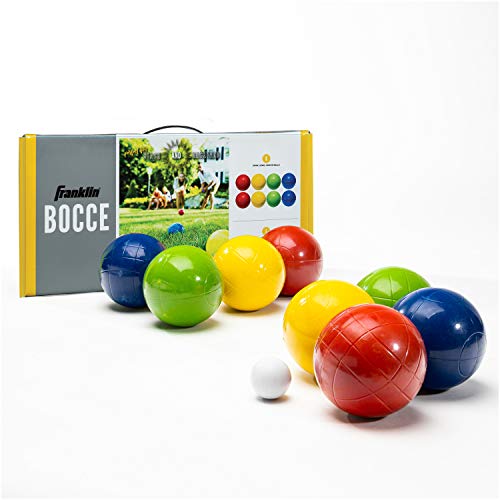 Duct tape the outer case to enable it to bear the balls’ weight.

Franklin Sports Bocce Ball Set is an affordable set under $25. Go for it to have a great time with family and friends!

Play Platoon Bocce Ball set is made with PVC that is soft and waterproof. It contains sand – making it lightweight and pop-resistant. If your kids are like mine and leave their games outside overnight, this is the set you need plus, they’re also great to bring with you to the beach. 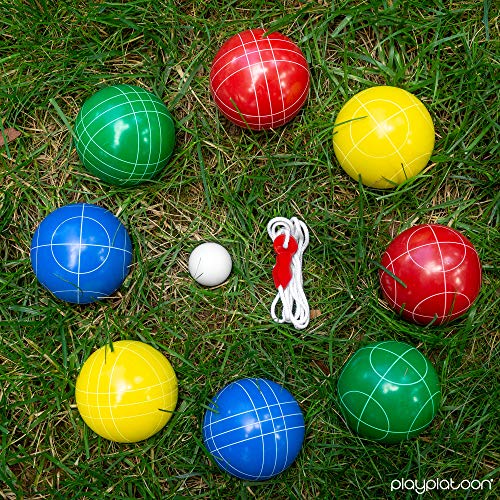 The carrying case is small and unreliable.

Use another sturdier bag for carrying the balls when on the go.

The Play Platoon Bocce set is ideal for outdoor use – the backyard and especially the beach. Its Bocce balls are water-resistant, and its price is similar to the winning entry above.

What is the best size of Bocce set to buy?

Professionals use 107mm balls, but if you are a beginner at Bocce or play with young kids, the 90mm balls are ideal.

Can you play Bocce on grass?

Bocce is an ideal yard game. I suggest that you cut your grass low so the balls roll easily. Because Bocce is so versatile you not only on grass but also in the garage, on gravel, dirt, concrete, at the beach, and on hard-packed soil. Some people even play it indoors on the carpet.

Can you play Bocce by yourself?

Ideally, Bocce is best played between teams having one, two, or four players each. But there is no stopping you if you want to play it on your own! Make your own rules as you go!

Are bocce ball, lawn bowling, and petanque the same?

Bocce, Petanque, and lawn bowling are not the same but rather distant cousins. Their objective is the same, but the playing techniques and tools used may differ. For example, the balls used in Lawn Bowling are asymmetrical and in Petanque, you toss hollow metal balls at a wooden target.

Bocce ball is an excellent family game to play at parties or the beach. The game originated in Italy, but Egyptians may have played an earlier version. The Roman nobility helped spread the game through various parts of Europe.

Today, there are many attractive and affordable Bocce ball sets available to fit your family’s needs. I recommend the GoSports Bocce Set because it’s well-made, durable, attractive, and affordable. It also comes with a sturdy and convenient carrying case. Do check out my other recommendations as well.