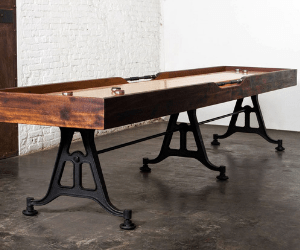 If you don’t know the tactics on how to build a shuffleboard table, you may have only known the United Kingdom without any reference to 10, Downing Street. Simply, your knowledge is half-baked.

It doesn’t also matter how much you’ve made off shuffleboard in your pub in the summer; you could choose to own a court on which you push those weighted discs down a narrow table.

Here’s the great news: if you get to know how to build a shuffleboard table, then you can seamlessly learn the techniques and skills required to play the game at your convenience.

But shouldn’t we know what shuffleboard is before even trying to learn anything about how to build a shuffleboard table and its dimensions?

Well, shuffleboard is a term not unfamiliar to anyone who has been around for some time in the gaming industry. Pub operators and owners are often eager to provide a facelift for their recreation by ensuring they have shuffleboard table plans when building their pub.

Each time you hear people say ‘use the cue you’re holding in your hand to glide those weighted pucks down a narrow court so you could have them come to rest in those marked high-scoring areas,’ you’re simply shuffle boarding.

That sounds familiar, right? We just have to bring those old memories back, and bring in the uninformed into the whole picture. But let’s get into the fray of how to build a shuffleboard table.

You don’t have to stress yourself up. The article provides an easy to get method of building a shuffleboard table for private and public use.

The marked scoring area “2” is of equal length with marked area ‘3’and is adjacent to it. A player scores two points when the pucks hit the area. The last scoring area furthest from one end and closest to another is the area marked “1”. It represents 1 point.  It is approximately four times as long in both scoring areas 3 and 2.

A foul line on a shuffleboard table describes the lines that separate the center of the table from the scoring areas. Essentially, if a shot fails to pass the foul line closest to the player, the shot is removed. Never fail to let your shot fall short of reaching beyond the foul line.

What about the ‘alley.’ Often called the gutter, this is an area around the table where players must ensure their pucks do not get knocked into it; if the contrary happens, the discs are considered out of play for that round.

We‘ve put together a simple step-by-step guide on how to build a shuffleboard table. Please pay close attention to the details contained here and follow the instructions carefully.

Just as you watch the farmer plan planting based on how much of the plot of land he owns or the seedlings available, you also need to have some things in place before even thinking of building a shuffleboard table.

That gives you an idea of the dimension of your table. Typically, the official dimension of a shuffleboard table is 39 feet long by six feet in width plus an additional six-foot shooting area at both ends of the table.

In addition to space, get the following raw materials and woodworking tools in place.

If anything is missing from this list, be sure you’re not ready to build a shuffleboard table yet. No pun intended.

But you can prepare something in the region of $800-$1,300. If you bargain for a cheaper cost, you’re simply asking for an inferior and indecent shuffleboard court.

People also want to know how many hours it’ll take to get a shuffleboard table built. Frankly, spare your whole week. In total, 64 hours should be enough. But, let’s break it down:

Building the frame and legs can take 30 hours; building the playing surface can eat up 15 hours of your time; finishing the frame can suck another 6 hours; completing the surface is another 10 hours; the final assembly will require nothing short of 3 hours.

Do you want to go the Do-It-Yourself way? Ok, then, let’s engage each other. Now we’re set to start.

When you’re making your shuffleboard table plans, never settle for counterfeit materials. However, to get away from the burden of the pricey OEMs, then use a medium density fireboard (MDF) as a cheaper alternative. You’ll need to reinforce the MDF when joining it together so as to ensure it stays intact and produces a sturdy table.

Professionals prefer solid wood, just as you can find with products from Georgetown and Level Bestblock. Using the hardwoods guarantees that the playing surfaces come out in thick and sturdy stature. The kinds of wood suitable to build a sturdy shuffleboard include mahogany, oak, and maple.

Now, we’ve chosen to go with the hardwoods.

Our next line of action is the sealing of the surface. The sealing style to adopt is left at your discretion. Once done, building the curling rings is the next step, and it’s achieved by gauging the diameters of the coiling rings with paper.

That completes the playing surface. Now, we can move to construct the box. Assemble the box before setting in the OBF material. With even ends, get on making the carpet. With the help of a staple gun, you could fasten the box.

Done with the playing surfaces, the box, and the carpet? We shall now complete this phase by assembling the legs of the shuffleboard table. The length and width of the legs will depend on the size and height of your box size. Measuring the legs requires accuracy; otherwise, If the legs measurement doesn’t match the box, you’ll end up having a faulty construction, meaning the box could fall off while you’re playing. And that can be tragic!

Drilling holes for the height adjusters or what is called foot levelers is the next step to take. Assemble the table, attach the scoring lines, and finish to the table, and then apply paint. Complete the remaining process 48 hours later.

And it is no surprise therefore that it’s not going to come on the cheap. For every good thing you see, there is a huge price the maker pays. Yours can’t be an exception. The ball is in your court for you to either grab or play away.

Finally, if you’re not sure you would do a good job, make sure you engage the services of professionals who can do a good job and deliver what would attract your marvel and bring value to your business.

At this point, goodbye is really hard to say. This is obviously a hassle to do, but it’s worth the sweat.

15 DIY Shuffleboard Table Projects: Do It Yourself Easily

How You Can Build a Shuffleboard Table - David Martin Architect

[…] Shuffleboard is an old game, having actually started in England in the 1400s. Originally called “shove-grout” it involved pushing a “groat,” which was a large silver coin, down the table. While similar to today’s variation, shuffleboard has actually become extra defined, with real tables made unique for the function, instead of utilizing whatever table is available. Here’s how you build a shuffleboard table. […]