Home » Foosball » The History of Foosball 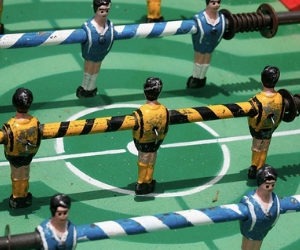 Among the best traditions of table games, table football, also known as foosball – the game of bouncing artificial soccer players around on a small table stadium, has a confusing background. Some individuals believe that the game emerged in several parts of Europe around the 1880s and 1990s as a sitting room game. Others think that it was founded by Lucien Rosengart – a novice inventor and engineering artist who had several patents. Rosengart acquired the copyrights of the game in the 1930s to provide his grandchildren entertainment during winter. It seemed to be every child’s pastime in entertainment areas throughout France, where small players were wearing blue, white, or red.

Also, some believe that Alexandre de Finisterre came up with the idea. He claimed that he created the design after he was bored in a hospital in Spain with injuries from a Civil War bombing. He worked with a local word artist called Francisco Javier Altuna to build the initial table that was inspired by the design of table tennis. While it is not clear whether Finisterre invented the game, the reality remains that the first person to patent the game was from Britain – Harold Searles Thornton in late 1923.

The universe would have been less noisy if the game would have stayed for children, but it spread very fast. The Belgians set the first-ever league in the 1950s. In 1976, the Europeans established the European Table Soccer Union. Even if they named it a “union,” the materials used to make the tables were different, and they differed in sizes, the handles did not have a similar design, and the compositions of the balls were different. There was nothing uniform about them. The game does not even have a specific set of rules.

In the 1960s, Lawrence Patterson made foosball reappear in America from West Germany. He contracted a manufacturer from Bavaria to make a machine with various specifications for export to the US when he patented the name ‘Foosball.’ He sold his tables as arcade games, and they became trendy among people. He started franchising the machines where partners would buy them and pay every month if they had a guaranteed area where they were only allowed to place them in various public entertainment locations. Patterson sold his game through advertisements that always came together with other franchise-based businesses like Kentucky Fried Chicken.

From the view of the third millennium and second decade, plasma TVs and digital technology, it would be hard to imagine the effect of table football on the determination of the Americans. The game became a national sensation in America during the 1970s. Addicted players started arranging tournaments that covered 60 minutes, and the winners were awarded various prizes. One of the most famous tournaments is the Quarter-Million Dollar Professional Foosball Tour that was developed by Lee Peppard, a foosball lovers and bar owner in Missoula.

The fall of American foosball even happened faster than its rise. The fall of foosball inspired various arcade games like Pac-man. The average 1000 tables that were sold per month in America during the end of the 1970s dropped to 100, and the company was declared bankrupt. However, the game did not die completely. In 2003, The United States allied with the International Table Soccer Federation that organizes Multi-Table World Championships every year in France.

Internationally, every region has its specific type of foosball table and gameplay style. Even the World Championship of foosball utilizes 5 different types of tables, with the other 11 different table designs being utilized in other various international tournaments.

Until lately, the novice approach to the rulebooks and tables was also utilized in the competitions. In real life, foosball is a game that is mainly played by amateurs for fun in bars. Although the British players may not be able to win such big prizes like the Americans, they still value table football Oxford University is among the biggest foosball venues in Britain, and it includes various professional players.

It might sound weird to imagine table football as an Olympic game, but people contemplated the same of beach volleyball in the previous years. However, the small number of fans who occupy the playing grounds when the game is being played can make it hard for it to become an Olympic sport as they cannot be able to raise income for the medals.