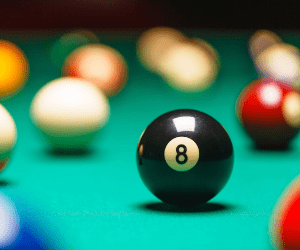 Eight Ball, a billiard game that involves 16 balls, is undoubtedly the most popular pool game. Its reach can be recognized by the overwhelming Google search on how to play 8 Ball. In fact, it is so popular that many beginners fail to realize that there are other pool games. Sometimes referred to as Solids and Stripes in the UK as a consequence of the different balls, is widely played all over the world, and its reach is seen in the rise of mobile playing platforms.

Objectives of the game

Unlike traditional pool games, there is no score. The game’s objective is to pot your assigned balls and finally win the game by potting the 8 Ball. There are designated balls for both players. On every ball, asides the cue ball, it is numbered from 1 to 15. These numbered balls are divided into Stripes and Solids. This differentiation is marked by the pattern on the balls. One of the players must pot the balls labeled from 1 to 7(the solid patterned and colored balls) while the other player must pocket the balls labeled 9 to 15 (the striped patterned and colored balls). Whoever ends up pocketing his assigned balls earns the legal right to pot the 8 Ball and wins the game.

The following items are used to play the game

Without a background understanding of the terms used, playing 8 Ball or any other pool game will not just be confusing but difficult. It is absolutely recommended that one takes time to learn the lingos used and the terminologies before proceeding to play. However, it may be possible that a newbie might not learn everything at once. As such, it is advised that the new player asks a veteran to make it clear what a particular term means. This also applies to some of the rules.

Aim: This is the act of using the cue to target the cue ball in order to hit the desired target (the stripe or solid balls).

Bank shot: This is that particular shot that involves the targeted ball traveling to its ideally desired pocket on the board.

Pocket: The pool table is built in such a way that it has holes or baskets along the sides. There are six of these holes, and they are all referred to as pockets. They are located at each corner of the board and one each along the midpoint of the longer sides of the board.

Pocketing: this is the action that involves knocking one or more of the balls into the pockets that exist on the sides of the pool table.

Break: Whenever you hear the word break, it simply means the first shot of the game.

Rail: The rail is sometimes referred to as cushion. It is the side of the pool tabletop that allows for the balls to remain on the board and bounces them back when hit.

Carom shot: When a shot is made, which allows for the cue ball to make a rebound and then pocket the desired ball, it is referred to as a carom shot.

Scratch: This is a foul in which the cue ball is knocked into the pockets. This ultimately makes the player lose a turn and one of the balls he has previously knocked.

Cue ball: The only ball amongst the 16 that is without a number and is colored white.

Solids: These are the balls that are fully colored. They are numbered 1 to 7.

Stripes: These balls are colored in striped and numbered from 9 to 15.

Snookered: This occurs when a player shoots the cue ball, and it ends up not having any contact with a target ball.

Foul penalty: When this happens, the opponent gets the chance to play. He gets the opportunity to move the cue ball to any desired position ready for aim.

Open table: This happens at the start of the game. It is termed open when no ball has gone into the pockets, and both players are yet to pick if they are on the solids or stripes side.

Rack: A triangular object in which the balls are arranged inside in order to make a legal break. This kick-starts the game

Placing the balls in the rack

The first course of action to take is to align the balls in the rack. Needless to say, there is a defined pattern of arranging the balls in the rack. All balls labeled from 1 to 15 are arranged inside the rack. The only ball that is to be outside of this rack is the cue ball. The ball labeled 1 is placed at the triangle end facing the break while a stripe and solid ball are placed at the other ends. In the middle, usually, the third row in arrangements of the ball is where the 8 Ball is placed.

With the balls arranged inside the rack, the rack is then removed, leaving the balls in the same triangle position as arranged inside the rack. After this, the cue ball is aligned at the head string. A coin may be tossed to determine which player takes the first shot. After the decision has been made, the player is then required to execute a legal break shot. The shot is legal if the shot is taken hard enough to drive one or more balls down the rails or even drive them into pockets.

Choosing either stripes or solids

Before taking the legal break, what we have is an open table. After the legal break, if no ball makes it down the pockets, it is still an open table. If the first shot results in a ball or balls making its way into the pocket, then the ball that goes in determines if the breaking player is stripes or solids. Take, for example, if the breaking player pots the 13 stripe ball, automatically he is Stripes meaning he is to put all the stripe balls into the pockets. Coincidentally, this means that the opposing player becomes solids and is therefore required to pot all solid balls.

Also, take note that there is no foul call if you hit more than one of your group ball. If you aim for a stripe ball and fortunately, two or more balls makes its way into the pocket, that is, therefore, an advantage.

It is worthy of mention that if a successful shot of your group ball leads to your opponent’s ball making its way into the pocket, it means you have aided your opponent, and there is no foul call.

A foul call results if your shot directly aims at your opponent’s ball or if the cue or 8 ball makes its way into the pockets.

Shooting all the balls

Your goal is to pocket all the balls in your group. If you are on the stripes group, it is then required that all the striped balls are shot into the pockets. Shooting your partner’s ball directly will only lead to a scratch.

The game ends when a player successfully and legally gets the 8 Ball into the pocket.

Rules of the game

The legal break involves taking a shot at the cue ball, which in turn leads to the driving of the balls into the pockets or at least 4 balls towards the rail. It, however, becomes a foul if the shot taken does not result in the aforementioned. The incoming player then decides if the balls have to be racked again or decide to accept the outcome.

This technical foul occurs when the cue ball is knocked into the pockets. If it happens that a scratch occurs on a legal break, all balls that may have been driven into the pockets will remain that way except if the 8 ball goes in too. Also, the player loses his turn to the opponent.

When a foul penalty call is made, the player loses his turn, and the opposing player gets the chance to have the cue ball in his hand. He is allowed to place the cue ball anywhere on the board as opposed to having it at the head string.

The foul call is made when

Placing the balls in a rack

An illegal pocket of balls

This occurs when an object ball is driven into the pocket on the same shot that a foul has been called or committed. It can also happen when the designated ball doesn’t make its way into the designated pocket.

Events that lead to loss of game

Different circumstances can lead to an eventual loss of the game.

Except when the 8 Ball is pocketed on the break, if during the game the 8 Ball is driven into the pocket, it signals the loss of game.

Also, a loss of game happens when the 8 Ball is driven off the pool table.

[…] it pertains to alcohol consumption, snacking, and playing a game of pool at the same time, stains will occur. A drink set on the rail of the table spills onto the felt, or […]