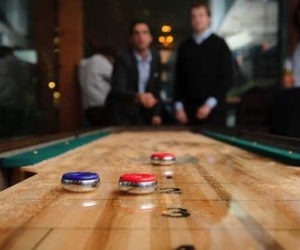 Have you ever had the thought of playing shuffleboard? Well, we will help you get started. Shuffleboard is one of the classic games whose popularity has kept on rising over the years. Understanding the rules and how to play will always remain a priority.
Often, you will choose between playing against one other person or three people. This way, we have two types of games, playing with two players and playing with four players. Whichever game you select, you will be confident of getting the ultimate experience.

We take a look at some of the critical aspects that you should follow.

How To Play With Two Players

The game usually starts by standing on one side of the shuffleboard with your opponent. Here, you will all have four weights each. These weights bear the same color for each player. After this, you will toss a coin to ascertain who starts the game.
The winner of this toss will be the one to shoot the first weight to the other end of the shuffleboard. The second end of the board is called the Scoring End. The opponent will shoot, too, in a similar manner. While at it, each player will try to out-distance the other with each move they make. The players will repeat this process until they shuffle all the eight weights.
Whoever has his weights at the farthest end of the shuffleboard will come out as the winner. However, it would be best if you made sure that the puck remains at the end of the table, not its edges. While at it, keep in mind that you will be free to knock off your opponent’s puck off the playing surface. It is part of your winning strategy.

How To Play With Four Players

First, you will need to split into two teams. It is from here that you will place a single player from the teams at the opposite ends of the board. Further, you will toss a coin to determine who will be the first to shoot.
These two players will shoot their four weights, alternately so. The process will repeat until that point when all the eight weights have been shuffled. Once they finish, round one will be over. The winner of this round is that whose leading weight is farthest down the board. You will need to sum their scores and register them on the scoreboard.

From here, the second set of players steps in for the second round. The winning team of the previous series will set the ball rolling by shooting the first weight. This game will go on until one side reaches 21 points.

Are There Any Rules For This Game?

Undoubtedly, like any other game, you will be subject to distinct rules when playing shuffleboard. But what are the distinctive practices that you need to observe? Here are a few aspects you need to keep in mind.

Scoring will only occur if all the weights are played according to the marked regions on the board. A disk needs to be within the lines, yet not touch any of the sides. Any disk off the 10-area will be overlooked. Whoever is first to reach 15 or 21 points in a game of two, wins. Usually, one will score if the weight is on the table, has wholly crossed the foul line, and is nearer to their opponent’s best weight.

Often, you will be allowed to play in two teams. Each team could have one or two players. Whichever the type of unit you choose, it needs to be uniform for both sides.

Conclusion
Shuffleboard is one of the games that will assure you of the fun you so desire. For as long as you are conversant with the rules in place, you will find it much easier to succeed in the long run. While at it, do not shy away from asking for further insights from experts. This way, you will have an easier time during the game.