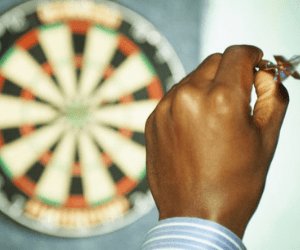 No other aspect of the game of darts can be more interesting than knowing how to throw darts the right way. Being on target a great number of times you throw the darts on the dartboard can both be relieving and fun, a lot of time.

The other side of the tale can be as boring as disgusting, no doubt. Having to throw darts off-target as many times sends a signal of failure, creates a sense of incompetence, and heightens some disinterest.

What’s ironic, you’ve won more laurels and packed accolades. Even coming out as the best and most outstanding toy shooter during your days in college adds to the nostalgia. But here you’re, missing four of the six targets you throw on the board. How frustrating could that be?

The rules of toy shooting and darts may be different. The manner of throwing the shots may also be different. Darts can be more tricky and technical than just triggering to release the bullet off your toy gun. But what’s not too dissimilar about the two is that they both require you to aim and get at your target.

As a beginner in the game of darts, three essentials are fundamental to your successful on-target throwing of the darts. You must have the right grip on the dart. Having a smooth and consistent release is also very essential. Keeping a good throwing stance completes the trio.

So that you know, that is not all. As you make your foray into one of the world’s most interesting indoor games, learn the rules, know the tricks, master the art, and participate in many more friendly games with other pro players. All is in a bid to improve your techniques and boost your confidence level.

This post exhausts all the basic information you need on how to throw darts the right way. It only requires a little sacrifice to read. You can be sure the post is worth every second of the time you spare.

The Rule of Keeping a Good Throwing Stance

Every game comes with its own posture. That’s a fact, you know! Throwing darts requires that you stamp your feet hip wide apart and behind the throw line. The throw line, technically called oche, should be avoided so that you don’t step over it when making a throw of the darts.

Positioning your body and foot

How you position your dominant feet depends on which hand you normally use to throw the darts. If you’re a right-handed player, your right foot and right hand go forward, leaving your big toe just a little behind the throw line.

However, for a left-handed thrower, the left side of you is sideways to the dartboard, allowing your left foot and hand to shoot forward, with your right foot falling behind your left foot.

Ideally, too, your dominant hand will come forward. While trying to throw, you could give your back heels a little raised off the floor to allow your target to reach its desired end. While doing that, your back foot must remain on the floor, exerting some weight on it.

Never stand with your body face-to-face with the dartboard. Is it a rule? No. The rule doesn’t say you can’t, but hitting your target accurately would be difficult (if not practically impossible) if you’re facing the dartboard as it places you in a very unstable position.

Missing the imaginary line is a taboo

You remember you’re advised against entering the worship center through the central eye. That doesn’t apply here.

Try to draw an imaginary line right from the center of the dartboard to the floor and down to the tip of your big front toe that’s forward. It helps you get an accurate throw.

With that done, the other foot should be facing sideways to the imaginary line and the dartboard while your body slightly turns and in a perpendicular position to the dartboard.

It is no punishable offense if you try to mark where you place your foot with your shoe each time you want to throw.

Never slouch your shoulders and hips

One mistake to avoid in the game of darts is to slouch over your hips or roll your shoulders. It’s wrong. And you can get punished for that by point loss. What the rule says is simply that you’ve to maintain a straight shoulder and hips, keeping both stacked on top of each other. Is that clear?

Now, your legs mustn’t bend but be straight when throwing darts. In that way, you’re able to hit your target and retain your comfortable grip without crossing the throw line.

But here’s some tactic you can also use, and some dart players adopt that a lot of times to maintain some comfortable stance: lean your upper body a little forward over the line to keep your eye closer to the board. But make sure your foot doesn’t cross the throw line. If it does and you hit the target, you get penalized, and your point drops.

Getting Familiar with Gripping

Now you know how to maintain a good posture and stance. What about learning how to grip the darts? This next step is as good and important as keeping a good throwing stance. It’s like knowing your position on the football pitch, without getting familiar with the ball and the tactics of keeping possession.

For a secure grip, use three fingers

It’s actually not a rule; rather, it’s a tactic. The potential winner won’t take this lightly. You can call it ‘the four-finger tactic. That’s no offense. What that simply means is that when you’re trying to throw the dart, you should hold its barrel with at least three of your fingers. That depends on the length of the barrel.

But let us get the gist first and foremost before we talk about the ifs and buts.

What do you mean by the barrel? The part of the dart that is raised, and it is more or less the middle section of the dart. Your thumb, index finger, and middle finger (and at times with your ring finger) will be the appropriate fingers to use to have a stable grip of the dart. However, a shorter barrel requires fewer fingers for grip.

Anything short of that may cause the dart to either fall off or never get to the target point. Using the tip of your fingers or curling them while holding the dart will only result in the same rules applies: never grip the dart at its tip or flight. Keep your fingers long and open, and never curl them.

Imprison and love? Yes, you heard the right words. And that’s the irony of gripping the dart. As much as you need to make sure the dart doesn’t fall off, you also need comfort when you want to throw. Darts isn’t a game of force; it’s rather one of touch and love.

Hence, you should think of maintaining a stable and comfortable rather than a firm grip on the barrel. You can see how that analogy comes to play. You only imprison the barrel and your chances of scoring points as well when you hold the barrel so firmly that it doesn’t have any freedom.

Instead, when you hold the barrel with comfort and stability in mind, then you’re establishing a sort of mutual love between your finger and the dart. Similarly, keeping a stable grip increases your chance of having control over the dart. In that way, your muscles or your fingers never get tense. The dart never gets suffocated, either.

With a dart in between your fingers, position your front arm properly by swinging it forward.

With that done, keep the shoulder level as you raise the dart to your eye level. Keep the darts to the side of your eye with your elbow pointing straight at the dartboard.

If you’re a geometrician, apply the linear pair perpendicular theorem here by making sure that your slightly raised elbow aligns with your hand and shoulder, all forming an angle 90.

Now you’re about to throw the dart. Wait a minute. Remember the following foremost steps:

How to Hit Your Aim on the Dartboard

1. Be still and straight

For speed, apply your hand, elbow, and wrist when throwing the dart with your shoulder giving support. While trying to throw the dart, increase the weight to your front foot, keep your body straight and still, raise your elbow slightly, and do not lean sideways.

Your wrist should snap forward when you’re releasing the dart. This will help increase the acceleration of the dart and cause you to hit your aim.

3. Keep your arm in action even after throw

Until the dart hits the target, your arm must be in throwing motion with your fingers pointing towards your target. Alternatively, your arm can be pointing downwards at the floor, but it must hover for a few minutes in the air before you bring it down. This ensures your body is in a stable position after throw.

Now that you have the tactics and rules of darts at your fingertips, how do you improve after your first trial? Three things are important. First, maintain a regular practice at least once a day. Remember the saying that practice makes perfect. Even if you can’t be perfect, regular practice will increase your skills and accuracy.

Two, join a league. Improving your skills requires that you blend with professionals who can help you. And you can find many leagues in your local areas. The third thing to do is to participate in public games. Don’t be a lone ranger. The saying is true that a tree doesn’t make a forest. When you combine your skills with others, you learn more and gain useful insights into the game.