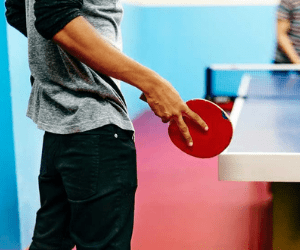 Table tennis is a game played by two or four people. It’s typically played indoors. The players stand at each end of the table, which has a low net across the middle and hit a small hollow plastic ball over the net by the use of wooden paddles. A table tennis grip is the way a player holds the racquet.

It’s called a shakehand grip simply because the blade rests on the V shape created by the thumb and the index finger while saving by the other three fingers.

Advantages of the shallow shake hand grip
• Since the grip is loose. It allows quicker readjustment of the paddle’s angle.
• Allows one to move his or her wrist freely, and this gives the player a strong power when brushing the ball.

Advantages of deep shakehand grip
• Prevents too much moving of the paddle in the hands of the player.
• Easier movement on either the forehand or backhand strokes.

The paddle handle is gripped the same way one grips a pen when writing with the thumb and index finger in the front while the remaining three fingers slightly curled around the back of the racket for support.

Advantages
• It allows free movement of the wrist leading to excellent forehead strokes.

Disadvantages
• It makes it impossible for the penhold grip players to reach either side of the table flexibly, thus forcing penhold style attacking to cover the table with all forehead attacks, and this drains the player’s stamina faster.

This type of grip whereby one is required to place the thumb and index finger on either side of the racquet while the rest of the fingers are placed at the bottom part.

Disadvantages
• Backhand side movement is hindered hence limiting powerful returns for the player.

What is wrong with having a backhand or a forehead grip?
Having a backhand grip gives somebody the ability to have lots of controls since the thumb is on the bat, but one would still struggle to play a solid forehand because they will have to drop their wrist slightly.

Some people may decide to switch between the two hence giving themselves the best. This works only at a level when one has time to change the grip and anticipate the ball. It’s not applicable at higher levels because there isn’t time to worry about changing grip in the middle of rallies that turns one to a weak player.

It’s worth spending a bit of your time checking your grip to ensure that it does not give you any serious problems.